What would we do without our smartphones if they didn’t have a GPS chip? Imagine people carrying actual maps or printed directions instead of using an app on our smartphones and getting turn-by-turn directions.

Being able to use the GPS from our smartphones, it all comes to the choice of software and which one is better. We’ve selected three of the most popular apps and made a comparison to see which one provides a better service and why.

Google Maps is popular among users, being the definition of mobile navigation, and it even came preinstalled as a default navigation software on the first iPhones.

Apple Maps was launched by Apple for their iPhones, replacing Google Maps with their own software.

Waze is a third-party app, alternative to Google and Apple Maps, which became popular even before Google bought the company.

Let’s see what makes every navigation special and what are their strongest and weakest points in matters of navigation.

Without any doubt, Google Maps is the best navigation app. And it should be, looking at how much money and how many resources have been used to ‘map the world’ for us. They not only mapped the streets, but also sent a horde of Street View cars all over the world to get 360 degree photos (99% of public roads have been photographed in US, for example). People can see the roads in a first person perspective so you can see how to get to a city in Greece, or to a hotel in Paris and so on.

Lately Google has added some 3D images of areas that are highly populated or touristic attractions.

There are also traffic alerts for when you drive and are prone to encounter traffic.

There is also the possibility to add stops in a trip and search for a new stop while you are enroute.

With options such as travelling with car, bus / public transport, walking, and biking, google maps is a handy app for anyone who’s planning on leaving the house.

If you’re outdoors you can also search for nearby services, such as restaurants, bars, clubs, stores, city hall and so on.

Google Maps is in continuous development and rolls out a lot of features, including the possibility so save some maps in offline mode for when you don’t have data connection.

You can even use some voice commands to mute / unmute voice guidance, to ask about next turn on your route, to avoid tolls / highways or find a gas station.

It seems like Google Maps has it all when it comes to navigation assistance, but is it better than Apple Maps or Waze? What else the other two apps can offer that Google Maps doesn’t have?

Waze – Owned by Google, But Different than Google Maps

Waze has been owned by Google since 2013 and since then both Google Maps and Waze borrowed a few features from each other. For example, Google Maps added traffic alerts from Waze and Waze added the Street View option from Google Maps.

Waze has a minimalist UI, even a little cartoonish with those funny looking faces when you see a new user or an alert for the police.

Waze is very different from the Google Maps experience from the very first second when you launch the app. You will then see users – ‘Wazers’ – in proximity, showing us the social detail that sets Waze apart from other navigation apps.

Waze also allows users to connect to Spotify and listen to music while you’re inside the navigation app and you can select playlists too, at the top of the screen. At the bottom of the screen you’ll see an orange button that has a map-marker symbol on it – if you tap on it, it will show you reports of traffic, road closures, speed traps, car accidents, roads in maintenance and more, all information being provided by the ‘Wazers’. You can turn the sound on or off for those alerts.

You can also go to the main menu by pressing on the magnifying glass and set a planned drive that you can later start with just a few taps. When it’s time to leave, Waze will announce you that you should take your leave to get in time to your destination.a 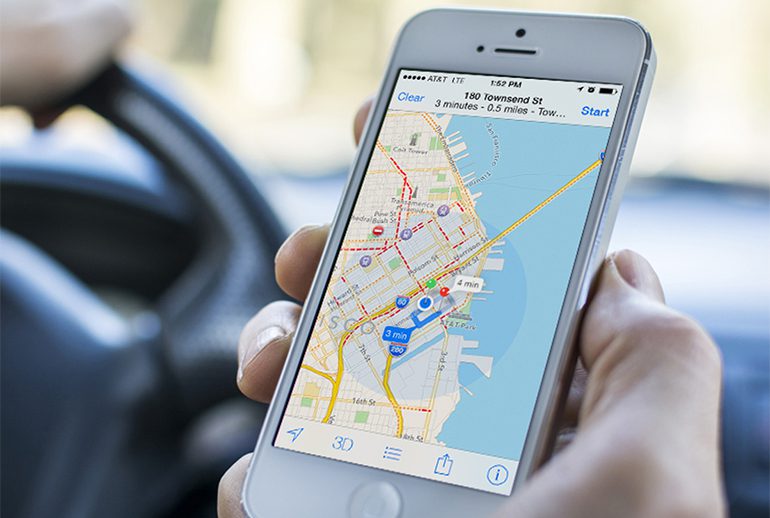 Waze will adjust the time it takes to your destination by how it encounters the traffic along the way.

There is also some information on parking lots near your destination point, so that you know where to park your car, as closest as possible to the destination.

Waze can also be customized and speak in different voices, in the past you could choose Morgan Freeman to guide you to your destination. That was quite epic!

You can also go to settings menu and choose a gas station of your preference or check the prices for gas.

There are a lot of features available in Waze that can be turned on or off, depending on what information you want.

The application runs smoothly and is perfect for drivers!

Let’s see what Apple Maps has to offer and how it competes against Waze and Google Maps.

As we have already mentioned, before Apple’s iOS 6, their iPhones had Google Maps as a default navigation app. It was time for Apple to have an alternative and so Apple developed their own navigational software. At first it was full of bugs and inaccuracies, but with time it improved and now it’s a smooth and enhanced app.

Investing a lot of money and resources in their Maps, Apple shows us a navigational app that has an elegant and refined look, and it has a better integration with iOS Apps.

You’ll see features such as suggested events that can be scheduled and to which you might need to travel. With Apple Maps you can also make restaurant reservations through OpenTable, Apple Maps will work for apps that provide ride-sharing services and it is also connected to Apple Pay so that you can pay for the services you chose.

There are other details added inside the navigational app from Apple: if you click on a landmark, you’ll be prompted some details and a picture about it, it will tell you how to get there and show you some Yelp reviews.

There are some cons when it comes to the actual map in Apple Maps: the map doesn’t contain very accurate information, unlike Google Maps. You won’t see many names or locations of businesses, so you can use this navigational software for when you simply need directions to a certain location and nothing more.

Conclusion: Which One is Better – Apple Maps, Google Maps or Waze?

We believe that Google Maps is the winner when it comes to a complete navigational software that provides everything a user needs, being backed by the powerful Google search engine that is impossible to top by Waze or Apple Maps.

We don’t say that Waze or Apple Maps are bad apps. They both have a lot of useful features, but not many users will find Waze a vital app. Apple Maps is a good competitor to Google Maps, having a great look and it is a good choice for iOS devices.

3 Helpful Gmail Tips and Tricks You Need to Know